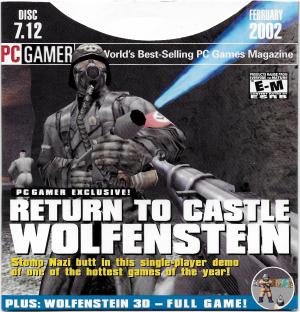 Return to Castle Wolfenstein: Stomp Nazi butt in this single-player demo of one f the hottest games of the year! This month on The CD — Return to Castle Wolfenstein – You've read our review; now's your chance to pump lead into those Nazi bastards. This demo features two complete levels from the game — one from the beginning escape, the other from a crypt battle with the undead horde. You get five weapons to choose from and a load of nasties that need a-killin'. So grab your Thompson and get in there! (M) Ballistics – Go faster than Taco Bell through your digestive tract in this futuristic bike racer. This demo includes a helpful tutorial that will get you up to (light) speed and includes one enormous map. You'll need a kick-ass 3D card and the ability to not blink for minutes on end. (E) Wolfenstein 3D – FULL GAME! This is the mother of all shooters. Before Quake, before Doom, there was Wolfenstein 3D. In case you missed out on the classic era of VGA graphics and steering with the arrow keys, you can play the entire game that spawned the whole genre! Make those Nazis run! (E) Patches — *Project Eden v. 1.02 *AquaNox v.. 1.15 *Empire Earth 1.0.4.0 *Soul Reaver 2 v. 1.01 AND MORE! See disc interface for full contents description.