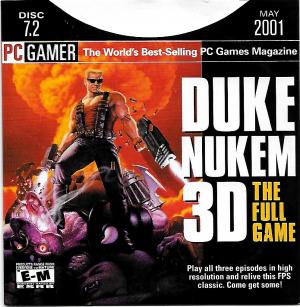 Duke Nukem 3D – The Full Game. Play all three episodes in high resolution and relive this FPS classic. Come get some! Duke Nukem 3D (FULL VERSION) – Give it up for the king, baby. This little 29MB packet of pixels single-handedly altered the first-person gaming scene by imbibing the lead character with a sense of humor and a memorable personality, as well as giving the world its first taste of mouselook. Pay homage to your roots, and prepare for what's to come when Duke Forever arrives. (M) NASCAR 4 – The demo for this Editors' Choice award-winning racing triumph gives you a feel for both the testing mode and multiplay. The graphics are bright, crisp, and detailed, and the physics will make you carsick. (E) NBA Live 2001 – Hailed as the best basketball you can play on the PC or any console, this new edition of NBA Live sports shiny graphics that finally make players look like their real-life counterparts. The demo lets you play the Pacers against the Lakers in exhibitions mode, and gives you a taste of the very cool street one-on-one mode, where you can play as Michael Jordan. (E) Desperados – Claiming to be the first game to successfully meld elements of adventure gaming with real-time strategy, Desperados pits gamers in central New Mexico in the middle of the Civil War, hunting down the fearless bandit leader El Diablo. Gorgeous Old West-style graphics await you. (T) Alliance for Quake III – If you install one Quake II: Arena mod, make it this one. it's 133MB compressed, and worth every byte. Alliance includes 26 custom maps (all with interesting themes and architecture), three play modes, four new weapons, custom power-up runes, an in-game map on the HUD, and color-coded weapon blasts. It's awesome. Giants: Citizen Kabuto – This 103MB demo was several years in the making, and you can finally see what all the fuss has been about. It's an interesting mix of action and real-time elements. The dynamic level of detail and colorful textures are stunning. (M) Star Wars: Battle for Naboo – Haven't had your fill of Episode I gaming goodness yet? Try this Rogue Squadron-style shooter on for size. Defend Naboo from invasion while stuffy Queen Amidala is arguing over trade sanctions before the Senate. The demo gives you one full mission from the full game. (T)