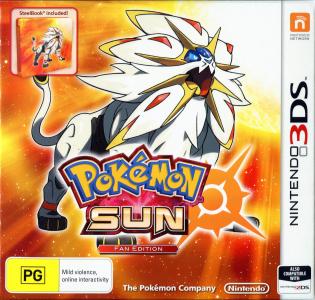 • Includes • Game & Case • Steelbook Case • Cardboard Sleeve Pokémon Sun and Moon are role-playing video games with adventure elements, based in the fictional Alola region (which itself is loosely based on Hawaiian and Pacific Islander culture), presented in a third-person, overhead perspective. The player controls a young trainer who goes on a quest to catch and train creatures known as Pokémon, and win battles against other trainers. By defeating enemy Pokémon in turn-based battles, the player's Pokémon gains experience, allowing them to level up and increase their battle statistics, learn new battle techniques, and in some cases, evolve into more powerful Pokémon. Alternatively, players can capture wild Pokémon, found during random encounters, by weakening them in battle and catching them with Poké Balls, allowing them to be added to their party. Players are also able to battle and trade Pokémon with other human players using the Nintendo 3DS's connectivity features. Like in previous games in the series, certain Pokémon are only obtainable in either Sun or Moon, with players encouraged to trade with others in order to obtain all Pokémon from both versions.