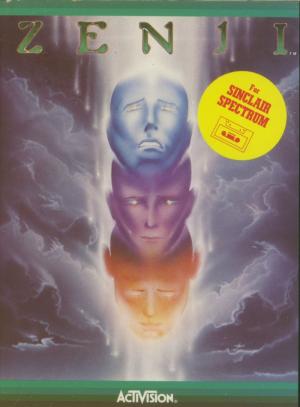 Zenji is a puzzle game designed by Matthew Hubbard and published by Activision in 1984.[1] It was released for the Atari 5200, Atari 8-bit family, ColecoVision, Commodore 64, MSX, and ZX Spectrum. Hubbard previously wrote Dolphin for the Atari 2600.[1] Zenji is a maze-based game, wherein the player controls a "disembodied, Mandarin-style head". The challenge is to connect a series of randomly rotated maze-segments in an attempt to align them with a glowing artifact, known as "the source", which acts as each maze's focal point. The player moves to each segment of the maze and attempts to rotate that portion so that the source's green light can shine into that region, signifying a correct alignment. If all portions of the maze are connected successfully before the end of a timer, the player is awarded points, and moves on to the next stage. Successive mazes introduce greater complexity and hazards to the player's survival.[2]