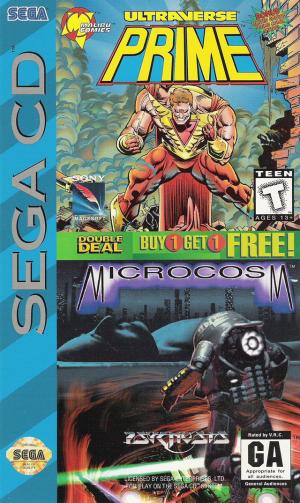 ULTRAVERSE PRIME It's Prime time, and that means the hottest action in the Ultraverse is coming to your home! Malibu Comic's superhero Prime was once just a teenager named Kevin. But after a secret experiment, he discovered he possessed extraodinary powers. Now he's out to rescue his friend Kelly. That means dishing out all the non-stop, no-holds-barred action his fans have come to expect... HIGHLIGHTS -Varied game play takes the player on a side-scrolling adventure through a myriad of challenging worlds. -Includes special fighting moves for the player to master and use against an awesome array of brutal enemies, including rocket-powered henchmen and missiles. MICROCOSM Microcosm plunges you into a dazzling world of super-realistic computer generated graphics set deep within the body of Cybertech's President: Tiron Korsby. You are the elite Cybertech agent chosen to pilot the latest hi-tech micro-submersibles on a desperate mission to find and destroy the deadly brain manipulation droid threatening Korsby's life.