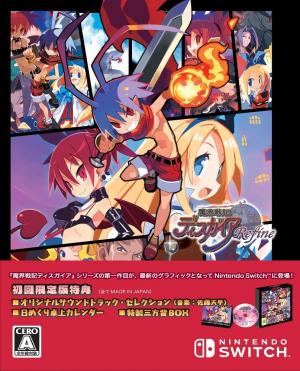 Disgaea 1 Complete (魔界戦記ディスガイア Refine Makai Senki Disgaea Refine) is an HD remastered port of Disgaea: Hour of Darkness for the Playstation 4 and Nintendo Switch. It was developed based off of Disgaea PC. It was first announced on April 18, 2018, and released the same year on August 26 in Japan, October 9 in North America, October 12 in Europe, and October 19 in Australia. It was released to celebrate the 15th anniversary of the series. The game features fully HD sprites and textures based on those from Disgaea 4, D2, and 5. Initially, the game was largely unchanged from PC aside from visuals, but patches have been released that provide small updates and improvements to make the game a smoother experience.