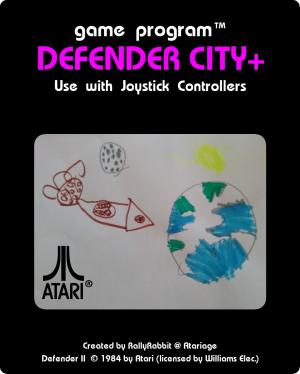 Modified Stargate/Defender II to make look as much like Defender for Atari as possible but play like Defender II/Startgate/Defender Arcade Changes: 1) Title Screen (part of design espire did for Defender Arcade that was not adopted) 2) End of Wave Screen changed 3) Firebomber changed into Atari 2600 Defender Bomber 4) Lander changed into Atari 2600 Lander 5) Mutant changed into Atari 2600 Mutant 6) Big Red changed into Atari 2600 Baiter 7) Phred now looks like a baiter that pursues but does not shoot (Purple/Pink in color) 8) Munchie now looks like a baiter that pursues only when ship is on screen with it (lime green in color) 9) Kept the bonus stages but changed the enemies included 10) Score digits are the digits used in Atari 2600 Defender 11) Removed Inviso capability 12) Radar changed to look as much like Atari 2600 Defender in color 13) Graphics for Extra Ships and Smart Bombs changed to a vector format 14) Scoring for pods is now 1000 points 15) Ship was changed (not like Stargate or Atari 2600 Defender) 16) Bonus for people at end of stage is 100 points 17) City added instead of mountains when planet is not destroyed (to give a look and feel more like Atari 2600 Defender) (Nukey Shay) 18) Removed Hypersace risk of exploding and losing the ship 19) Hypersapce can be used with Player 1 fire button while at the top of the playing area and pushing up while firing. There is no limit on hyperspace. NOTE: When a Hyperspace is used successfully, the ship will not fire a laser. NOTE: When a person is abducted, hyperspace can be used to jump to the abduction (like the old stargate worked previously). NOTE: When hyperspace is used, the ship does not fire. 20) Smart Bombs can be used from player 1 fire button when at the bottom of the city or space area if planet destroyed) while pulling down on the joystick for player 1. NOTE: People in the city can still be shot if at the level to use smartbomb. NOTE: When a Smart Bomb is used successfully, the ship will not fire a laser. NOTE: If joystick is not pulled down when firing to use smart bomb, the ship will fire and will be at the level of people on the ground). NOTE: When bomb is used, the ship does not fire. 21) Removed Munchie, Phred, Yllabian Space Guppy as enemies 22) Sounds of enemies shooting has been changed to be more similar to Atari 2600 Defender 23) Removed the platforms under the people when planet isn't destroyed 24) The color of the people on the planet matches Defender Arcade 25) Scoring for picking up falling people is not cumulative increasing, it is a standard 500 points 26) Stargate is no longer in the play area or the scanner 27) Retained and use the dynamo that comes out in attack 2 of waves 28) First attack of each wave contains Landers, Dynamo, Bombers with Pods (after wave 5) 29) Second attack of each wave contains Baiters that do not shoot, Bombers and Landers 30) Baiters that can shoot are introduced singly after lengths of failing to end the wave after the second attack occurs 31) Wave multiplier for increasing enemy speed is slowed down by half to get better longer game play out of a typical game (one of the big complaints of defender II/stargate/defender arcade is how short the games are because it is too hard). 32) End of wave "person" bonus text now doesn't look goofy (it actually flows with the rest of the text) 33) The score will now have the leading zeros all the time 34) Put "AtariAge" at the bottom since this is a collaboration of minds that brought this together 35) Ship "flying" sound is now the same as Atari 2600 Defender 36) Person abduction now sounds as close to Atari 2600 Defender as possible 37) Enemy shots are now made to sound as close to Atari 2600 Defender as possible