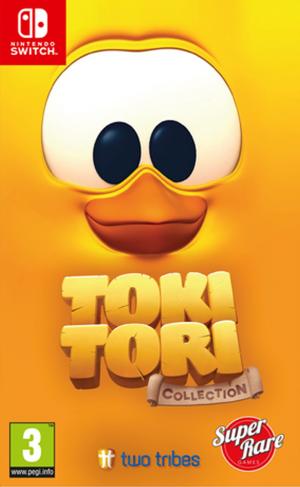 Each Cart contains three games, Toki Tori 1, Toki Tori 2+ and an emulated version of the original Toki Tori on GBA. Toki Tori 1: Take control of Toki Tori, a surprisingly heroic chicken, as he puzzles his way through 80+ levels spread over five unique worlds. Toki Tori isn’t very athletic, he can’t even jump! Luckily he has some great tools at his disposal, including the Telewarp, Freeze-o-Matic and InstantRock™. Creative thinking and problem solving are required to collect all eggs in each level, but don’t worry! When you get stuck, you can always rewind time. And if all else fails, use the Wildcard to skip a level. Toki Tori for Nintendo Switch is the most detailed portable version of the game so far. Toki Tori 2+: Explore an enthralling forest island, learn magical songs and interact with the local wildlife to solve environmental puzzles. Toki Tori 2+’s ingenious game design requires just two moves: whistle and stomp. It's super accessible, yet it builds up to incredible complexity later on. There’s a tonne to do, too. After puzzle-solving your way to five Ancient Frogs and saving the island from a strange pollution, you can still find hundreds of golden wings, snap dozens of creature pictures and go Achievement hunting. Toki Tori 2+ is better than ever on Nintendo Switch, with lots of gameplay tweaks and even some new secrets and puzzle solutions. Plus, you can now create checkpoints wherever you like, allowing for easy experimentation.