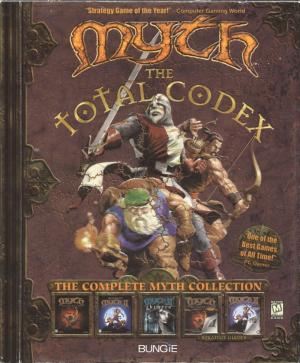 All three Myth games play very similarly. They are real-time tactics games, and as such, unlike the gameplay in real-time strategy games, the player does not engage in resource micromanagement or economic macromanagement, does not construct a base or buildings, and does not gradually build up their army by acquiring resources and researching new technologies.[9] Instead, each level begins with the player's army already assembled and ready for combat.[10][11][12] During the game, the player controls forces of various sizes made up of a number of different units, each possessing their own strengths and weaknesses. In single-player mode, only Light units are playable, but in online multiplayer mode, the player can control both Light and Dark units. On November 15, 1999, Bungie released a special edition called Myth: The Total Codex, which included The Fallen Lords, Soulblighter, the Soulblighter expansion pack Myth II: Chimera, and official Strategies and Secrets guides for both of the main games.