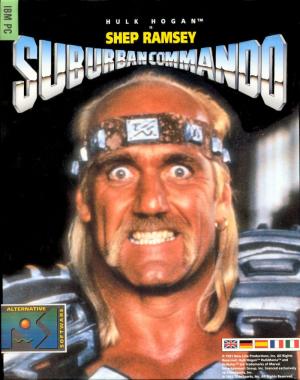 Suburban Commando is a mix of space shooter, jump-and-run and beat-em-up. If you're a US American, the mention of the name Hulk Hogan will most likely make some tears sparkle in your eyes, while your reminisce about the good old days when the Hulkster single-handedly beat up all those jerks in the WWF. If you know Hogan only from his movies, you'll have a different reason for crying. One of the films featuring Hulk was called Suburban Commando (1991). Alternative Software turned it into a game two years later, and decided to create a wild mix of space shooter, platform jumping and - of course - beat-em-up action. Loosely following the storyline of the film, Hogan alias intergalactic hero Shep Ramsey travels through space, crash-lands on earth and beats up the bad guys. The first level is a R-Type-like horizontal space shooter; destroy formations of drones and collect weapon upgrades. After that, you'll enter three platform levels, in which you have to find nine items each. Avoid being shot and dispatch the enemies with kicks and jumps. After each mission, you’ll encounter the level boss, who you’re supposed to beat up in a Street Fighter clone. Apart from a comic-style likeness of Hulk Hogan as the main hero (with a huge head and tiny body -- strange), the game has little reference to the movie. No other main characters appear. Fans of the film will especially mourn the complete absence of any mimics. If you’re curious for more information about the movie, check the trivia and links sections.