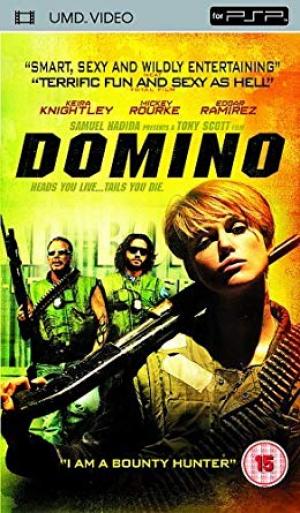 Domino is a 2005 action crime film directed by Tony Scott with a screenplay by Richard Kelly from a story by Kelly and Steve Barancik. An international co-production between France, the United States, and the United Kingdom,[1] the film is inspired by Domino Harvey, the English daughter of stage and screen actor Laurence Harvey, who became a Los Angeles bounty hunter. Its plot flashes back as Domino (Keira Knightley), fashion model turned bounty hunter, narrates how a $10,000,000 robbery came about 36 hours before. Supporting actors include Mickey Rourke, Edgar Ramirez, Delroy Lindo and Mo'Nique. The film is dedicated to Harvey, who died at age 35 from an overdose of fentanyl on June 27, 2005, a few months before the film was released.