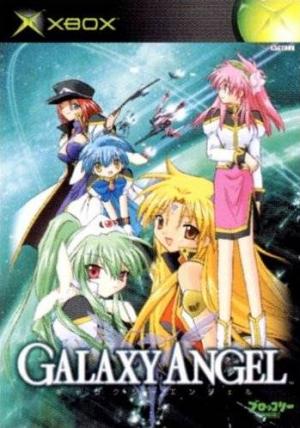 Galaxy Angel is primarily a visual novel (VN), punctuated with real-time tactics (RTT) gameplay segments. The VN segments are fairly typical of the genre and straightforward; taking the role of the protagonist, Tact Mayers, the player reads through the dialogue, occasionally making a choice from several presented options that affect the flow of the story. Tact's overall goal is get to know the members of the Moon Angel Troupe. earning their trust and eventually pursuing a romantic relationship with one of them. On occasion, the player will be given the freedom to move about the Elle Ciel, inspecting the various rooms and meeting the Angels. With the exception of the introductory tour, however, Tact can only spend 30 minutes touring the ship at a time, and each room visit takes five minutes, so the player must allocate time accordingly. The decisions the player makes affect the morale and trust of the Angels towards Tact, in turn affecting their combat abilities. For this reason, the player should attempt to keep the Angels happy. \