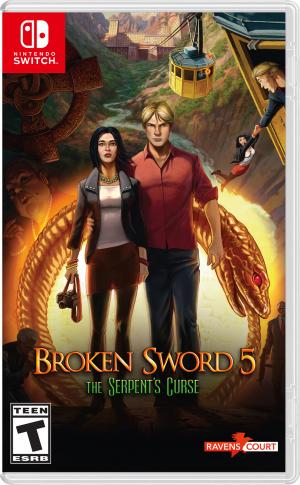 Paris in spring. Shots ring out from a gallery. A robbery - a murder - and the beginning of another epic original Broken Sword adventure. An adventure that will hurl intrepid lawyer George Stobbart and sassy journalist Nico Collard onto the trail of a murderous conspiracy forged in the cauldron of war-torn Europe. A conspiracy whose roots lie in mysteries older than the written word. When George and Nico get together nothing is ever what it seems like. There are codes to be broken, murders to be cracked, ingenious puzzles to be solved and troublesome adversaries to be defeated. Armed only with logic, integrity and a wry sense of humour - can they outwit evil forces both ancient and modern and save mankind from impending disaster? Key Features: SWITCH VERSION - The latest Broken Sword adventure, initially released episodically on PC, PS Vita, and mobile devices, is now playable in its entirety on Nintendo Switch with unreleased bonus content. BACK TO THE ROOTS - Hand drawn environments brought to the High Definition era. Richer and more detailed graphics give the game a luscious visual style that stands out from its peers. ICONIC HEROES - George Stobbart and Nico Collard are two of the most iconic characters in video gaming. Extensively re-interpreted for their first high definition outing, our heroes maintain their familiar looks, but with significantly more detail, animation and expressiveness. GLOBE-TROTTING ADVENTURE - Boasting a varied array of locations to explore from Paris, London, and Catalonia through to the Middle East, each area is designed as a visual feast evoking the signs and sounds of their real world counterparts. SOLVING THE MYSTERY - Experience the very best in adventure gaming: from unique puzzles and deft subterfuge to cipher-solving and time-honored detective work. BONUS CONTENT: 1080p Visuals : Graphics tuned up to 1080p in portable and TV mode. Seamless Play : Seamlessly transition between touchscreen and Joycon controls. Bonus Movies: The Switch version includes bonus movies created speciifically for this format which are unlocked as the game progresses, including unreleased behind the scenes interviews.