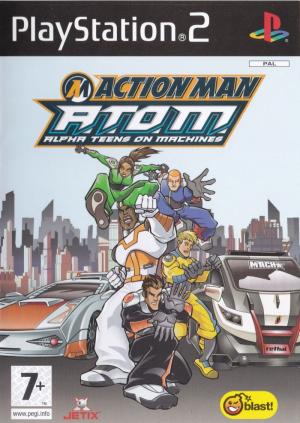 Action Man: A.T.O.M. Alpha Teens On Machines is a single player game based on the a French animated television series A.T.O.M. Alpha Teens On Machines. The Alpha Teens are Axel Manning, Catalina Leone, Crey Kingston, Zack Hawkes, and Ollie Sharker who test prototype vehicles and weapons for Lee Industries which they use to combat criminals in the fictional Landmark City, particularly the sadistic Alexander Paine. In this game the team are pitted against Alexander Paine who has broken free from Landmark City's triple maximum security prison. Gameplay involves testing various machines on Lee Industry's test track before taking to the streets and battling his minions.