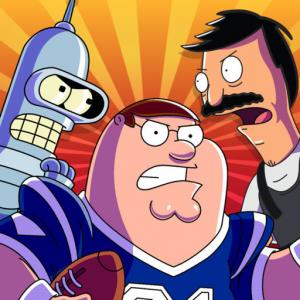 Animation Throwdown: The Quest for Cards

Animation Throwdown is a free-to-play online collectible card game that combines content and characters from five animated television shows that originally aired on Fox – Family Guy, Futurama, American Dad!, Bob's Burgers and King of the Hill. It is available on Google Play[1] , the App Store[2] , Steam,[3] and on the web via Kongregate;[4] all platforms share the same instance and players may use more than one platform to play the same account. Turn-based gameplay consists of playing cards drawn from a virtual deck into the player's hand onto a tableau to fight against an AI playing cards from its own deck; depending on game mode the AI's deck may be system-generated or may belong to another player. Cards attack the card directly across from them and, if unopposed, attack the opponent's "hero"; the battle is won when the opponent's hero is defeated. A main tactic of card play is to play a character card and object card into the same slot to fuse into a more powerful combination ("combo") that the player has previously learned.