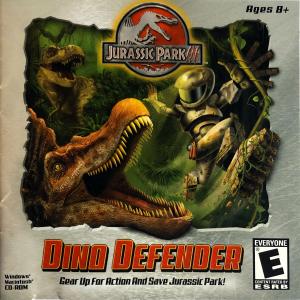 The six levels of Dino Defender consist of fast-paced quick thinking challenges. The player must move around obstacles and find supply boxes, switch on circuit breakers and avoid dinosaurs. Helicopters drop supply boxes onto the island, which contain gear such as a net, a tranquilizer or a distractor flare which can be used to capture or distract dinosaurs. "Call boxes" can be used to lure dinosaurs and various other weapons to tranquilize them. "Circuit Breakers" scattered around the island can be switched on to activate the island's electricity. To collect gear to capture/tranquilize a certain dinosaur, the player must find a 'supply box' which contains a certain number of both 'call boxes', which are small speakers that play a dinosaur call, causing dinosaurs of that species to investigate. At some points in the game, the player will have to swim underwater. When a player is underwater, an "air" gauge appears, which slowly decreases. The player will die if the gauge runs out of air. Upon completion of the game, the player is rewarded with printable trading cards showing the dinosaurs the player has captured. Trading cards for each dinosaur are only rewarded after all the dinosaurs belonging to a particular species have been captured. (Source: Wikipedia)