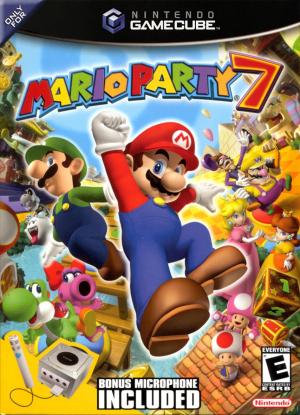 Mario Party 7 (Japanese: マリオパーティ7 Hepburn: Mario Pāti Sebun) is a party video game developed by Hudson Soft and published by Nintendo for the GameCube. The seventh main installment in the Mario Party series, it was first released in North America and Japan in November 2005, in Europe in February 2006, and in Australia in June 2006. It makes use of the microphone peripheral introduced in Mario Party 6, and features twelve characters, including two new unlockable characters: Birdo and Dry Bones. Koopa Kid was omitted as a playable character, after being playable in the two previous games. Mario Party 6 was the last game in the series released for the GamCube, and was followed by Mario Party 8 for the Wii in 2007.