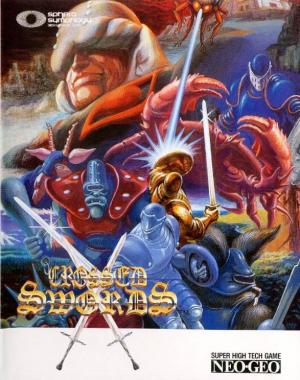 In the enchanted land of Belkana all was well until plagues of creatures started rampaging through. But it didn't stop there, from deep within the mountains of Graisia, the Demon Warlord Nausizz arose and led the attacks wiping out settlement after settlement. However a brave warrior called "The Knight of the Journey" came a long way on a quest to stop these monstrosities. After aiding the Poor Village of Dio from the Caterdragon, the knight heads to the Castle Pulista, but as he is briefed by the king of the problems they face, an elite dark knight appears and kidnaps the princess. The knight fights his way through the enemy lands in the Matius Tower, the Gauda Fortress, the Land Battleship and finally passes the Entrance to the Devil World. Along his way, he is helped by loyalties of the kingdom. The knight battles through the Castle Graisia and comes face to face with Nausizz. As a demon with honour, Nausizz is so impressed with the knight's progress, that he has sent the princess back to Pulista. As the knight defeats Nausizz, he transforms into a fiendish demon dragon. The knight slays him and escapes the collapsing castle. Back in Castle Pulista the knight is offered to come and live with the king. Peace can proceed once more in Belkana.