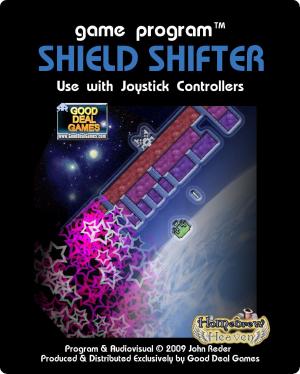 Programmed deep beneath the surface in the Homebrew Heaven underground lab, this is a Good Deal Games EXCLUSIVE release! Shield Shifter was premiered at GameCore on Sept. 12th, 2010. Shoot your way through the Alien shifting shields to give yourself a clean shot at the attacking Alien Queen.The Alien Queen shoots lasers and drops sticky bombs. Sticky Bombs will block your ships path for a few moments. The spaceship moves closer to the shield each time 10 alien Queens are destroyed. Play against the computer or duel against a friend in the 2-player Battle Mode