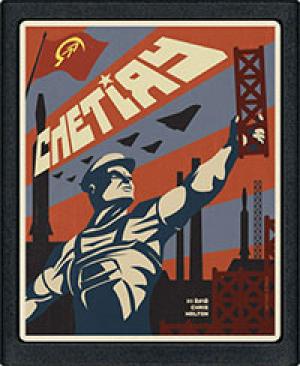 The Soviet Union is crumbling, and so the most brilliant scientific minds have hatched a final master plan of world domination to save the republic. Their plan is the construction of a gigantic infernal machine, superior to all other weaponry. For the plan to succeed, vast quantities of steel beams are required. But the proletariat have become drunk on the smell of freedom and will only produce small twisted shapes of metal. Your job is to combine these feeble parts into large sturdy beams, so that the diabolical plan can be realized. Chetiry is a new puzzle game for the Atari 2600 console. The objective is to combine falling shapes of 4 squares (tetrominoes) into continuous horizontal lines of 10 squares, which will remove them from the grid. "Chetiry" is a loose translation of the Russian word "Four". Game Features Four different game styles (described below) Selectable in-game tunes 20 Difficulty Levels Pause feature Toggle Shape Preview on/off Toggle Fast Drop on/off High scores saved to cartridge Game Styles Marathon: In this game style, the game continues until the grid overflows. The game difficulty will increase each time 10 lines are removed from the grid. Sprint 25: In this game style, the objective is to remove 25 lines from the grid. The game difficulty does not increase beyond the level that is set in the menu. The game will finish when all 25 lines have been removed. Sprint 40: This game style is similar to SPRINT 25, with the objective to remove 40 lines from the grid. Ultra: In this game style, you have 3 minutes to score as many points as possible. The game timer is shown at the top of the screen, and the game will finish when the timer reaches zero.