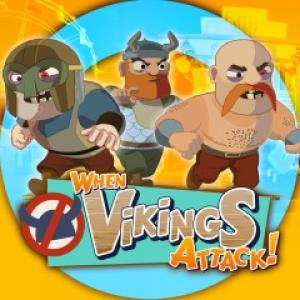 When Vikings Attack™... What will YOU do? A battalion of Viking invaders has landed 1200 years late to the party in a bewildered and bewildering modern day Britain rife with rock ‘n’ roll, polyester, and color television. Unite the townsfolk and fight back against the invasion! This dynamic adventure for PlayStation®Network features fast-paced battles pitting up to four co-operative players against the Viking hordes, and maniacally competitive “Versus” arenas where players can test their skills against friends. With online cross-platform play and save compatibility between PS Vita and PS3™, saving the day has never been more fun! • Unite the townsfolk to defeat the Viking hordes in this all-action adventure • Form a team of up to four co-operative players to fight off the Viking invasion, or battle one another in fiercely fun competitive game modes • Discover a wealth of hidden characters and complete masses of unique level challenges • Whether at home or on the go, keep the battle going with cross-platform compatibility between PS3™ and PS Vita