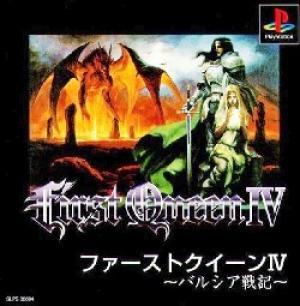 The First Queen games are RPG's with a touch of real-time strategy. Instead of controlling one character, you control several armies of around 18 characters. You move the armies across the world map, and when you get into a battle you can control each soldier individually in real-time. The fourth entry in First Queen series utilizes the trademark "mixed-up characters" battle system, with dozens of characters on both sides fighting each other in real time. Compared to the previous entries, First Queen IV emphasizes the war game aspect, with less focus on RPG-like exploration and more strategic challenge. The game was first released in PC-98 in 1994 and was re-released for Playstation in 1996.