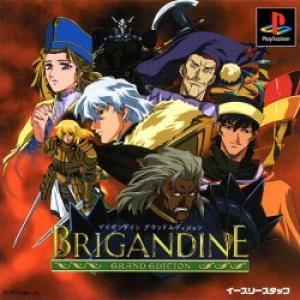 Brigandine: The Legend of Forsena is a role-playing war simulation title in the fashion of Tactics Ogre, Ogre Battle, and Final Fantasy Tactics. At the beginning of the game, players will select one of five different Knights of the Rune and defend a specific piece of Forsena. Lance is a young fourteen year old prince that has been summoned to protect New Almekia and Late Badostow; Lyonesse must defend her kingdom of Leonia; and the lord-ranked Vaynard will defend the northlands with his White Wolf warriors. The Grand Edition remake of the game released in 2000 had many significant changes, including: - Multiplayer game mode: allowing up to 6 players, each controlling a nation. - Changes on battle mode gameplay: Like on the Fire Emblem series, elements became based on the Rock, Paper, Scissors rule: red is effective against green, green is effective against blue, and blue is effective against red. White and black still oppose each other. - Many dialog-only cut scenes where replaced by anime cut scenes. - 3D battle animations replaced by simpler and faster 2D animations.