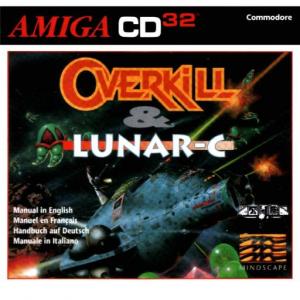 Also know as: Overkill and Lunar-C

This CD contains two shoot 'em ups. The games are: Overkill - a Defender clone Lunar-C Lunar-C is unique in that it was only released in this compilation. The back story revolves around a giant dreadnought attacking an unnamed planet. The player takes the role of the chosen hero and boards their flying saucer to eliminate the aliens called Sirians. The game is a horizontal scrolling shooter. After a wave of enemies is destroyed, they release a power-up token. Collecting it will advance the weapon select gauge by one step, similar to Gradius. In this way, the weapon systems of the player's ship can be upgraded. If the player hits an enemy or a bullet, their energy bar is reduced. At the end of each level, a guardian awaits that needs to be destroyed in order to advance further in the game.