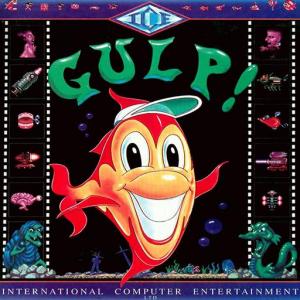 The Earth is flooded, humanity is on the brink of extinction. The distress signal from planet Earth reaches a far away underwater planet and the inhabitants decide to rescue us. They send a spaceship with Captain Gulp and the Aquarons towards our star system and it's the player's job to see that they are successful! In Gulp!, the player controls a number of fish swimming in water filled tubes. The game takes its inspiration from Lemmings - like in the aforementioned game, you have to pick specific "jobs" for some of your fish to solve the puzzles in each level. A lot of the gameplay revolves around flipping switches in the correct order to alter the water flow within the pipes. In some of the later levels, the fish crew has to be split in multiple groups to finish the stages. The goal of each level is to get the fish to the exit, and all this has to be done within a time limit.