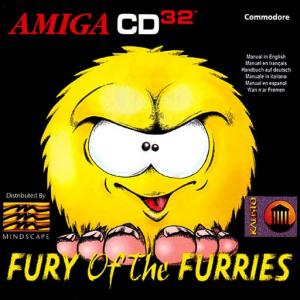 Fury of the Furries

In Fury of the Furries, you control a cute, round creature called Tiny, who must defeat "the wicked one" who has captured the King, and turned all the Tinies into mindless monsters. Fortunately your Tiny has special powers. It can transform himself into a swimmer, rock eater, fireball spitter or rope swinger during its quest. The game takes place on a huge island separated into eight regions: Desert, Lagoon, Forest, Pyramids, Mountains, Factory, Village and the Castle. When you manage to get through them, the last one awaits: The Machine which seems to be some sort of a way to get out of here. This level is not a typical stage after stage approach. Each screen has several exist that can either bring you closer to or further from the end of the game. For the US release the title was changed to 'Pac-In-Time'. It's exactly the same game. Only the characters were changed : the not-so-known European Tinies (from the Skweek, Super Skweek, Tiny Skweeks/Brainies/Tinies games) were replaced by the widely known Pac-Man.