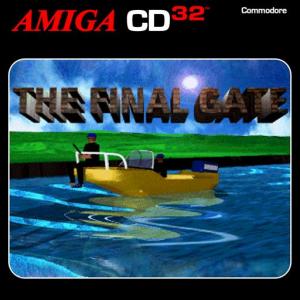 The Final Gate is a full motion video rail shooter. The player is seated in the front of a speedboat that is moving down a river. The boat is moving forward automatically and the player's input is limited to moving a crosshair over the video footage (which only takes up a quarter of the screen) and shoot at the projectiles that are launched towards the player's position. If they are not shot quickly enough the player takes damage and loses energy. Sometimes enemies will appear at the side of the riverbank and by shooting these a special video sequence will be shown. If not the player is likely to take a lot of damage. To regain some energy it is possible to shoot power ups that at times appear on the screen. When all out of energy one of three lives is lost.