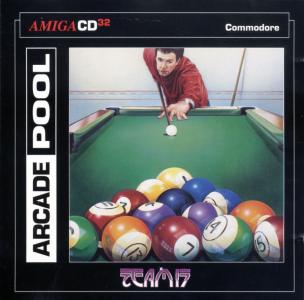 Arcade Pool is an overhead viewed pool game designed to be easy to control. The game includes the most standard games of pool (UK and US 8-ball and the fast-paced 9-ball game), each with customisable rules, computer players of variable difficulties, and two-player options. There's also a Survivor mode, which is similar to the early Pool arcade game, in that you're playing alone and have to clear the table without missing more than three times. Speed Pool involved clearing the table as quickly as you can - two minutes can be considered a good time. The Amiga version includes automatic enhancements for accelerated systems, those with more than 1Mb of memory, or the AGA chip set (so a standard A1200 wins on all three counts).