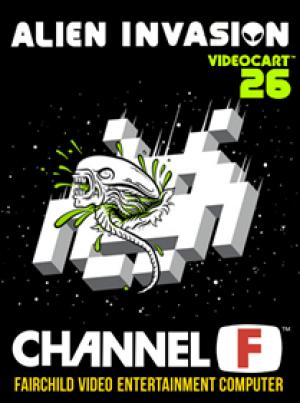 In this Space Invaders variant, the player controls a gun turret at the bottom of the screen and fires missiles at incoming alien ships. The turret can move both left and right and hide behind three protective barriers. The alien invaders move left and right, fire missiles at the player, and slowly approach the planet surface - if they land, the player loses the game. Every once in a while, an alien mothership will fly across the top of the screen and shooting it will give the player extra points. The goal of the game is to destroy all alien ships in each attacking wave and score as many points as possible. The game ends when players lose their three lives. The game can be played by one or two players (turn-based or simultaneously). Depending on the selected game mode, there can only be 1 or 2 player missiles on the screen, and 2 or 4 alien missiles at the same time.