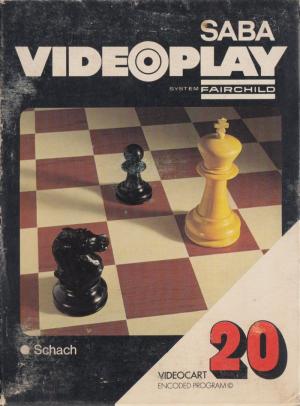 Schach (German for "chess") was released for the Saba Videoplay, a Channel F-compatible system that Fairchild licensed for the European market. In this early chess simulation you can only play against the machine, as there is no multiplayer support. The player can chose either the white (actually green on screen) or black (actually red) pieces, and can select from 4 different AI difficulties. The easiest AI plays its turns in a matter of seconds but, as the difficulty increases, each turn can take several minutes. In the highest difficulty, the AI can take up to 50(!) minutes to decide its move. To allow the player to watch something else on the TV while the system is busy, the game cart has a very special feature: an integrated red led lights up while the machine is "thinking". During the game, the player can ask the computer to help him with his next move. In those situations, the system analyses the board and plays impartially.