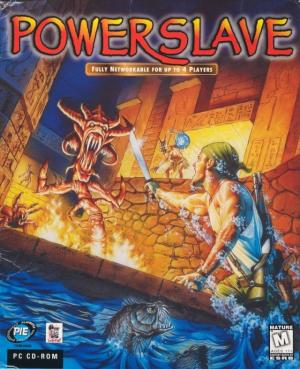 The MS-DOS version of PowerSlave features many differences from the console versions. The MS-DOS version was built on the Build engine, licensed from 3D Realms. The version used is a slightly earlier version of the engine, made sometime before the version used in Duke Nukem 3D. The light sourcing from the SlaveDriver engine is not used; the Build engine's own light sourcing is used instead; the game also uses "fake" dynamic lighting where sectors light up as projectiles or "glowing" objects in general pass through. The HUD interface is different; featuring an ammo counter, lungs (oxygen levels) for swimming and animated mana and blood vessels. Players have usable Mana energy that can cast spells once the spell has been acquired (e.g. collecting a torch allows the player to use energy to illuminate dark areas). Ammo is not universal, instead of blue orbs usable for all weapons, separate ammo is needed. Grenades are used instead of Amun mines. Some sprites are different (e.g. M60 machine gun), sprites are larger and more animated in general. Audible words are used for the player character instead of grunts. Mummies fire a "white skull" attack, or a partly homing red one, that when hit, turns the player into a mummy momentarily, additionally with the most powerful weapon in the game: the Mummy Staff, which can destroy all enemies within range of the player. The player reverts to normal once the weapon is used. Checkpoints are placed throughout the level by indication of golden scarabs and Saving is automatic between levels. Levels are conducted in a more linear format. Players can replay previously completed levels, but later stages may only be played after completing the level prior. The Manacle of Power fires a lightning cloud above the enemy, rather than firing lightning bolts from the player's hands. Most of the artifacts from the console versions are not present (except the Sobek Mask, which is a spell). The powerups in the Sega Saturn version are included as spells (invisibility, invincibility and double damage). The Ring of Ra weapon is not included. Weapons pause to reload after a certain number of shots are fired. Some enemies have different death animations when killed by fire/grenades; bosses have longer death animations. There are extra lives instead of health extensions. The Amnit enemies are not included; instead there is the giant Ammut miniboss which has ramming and biting attacks. There is additional story text. The transmitter, which was a set of eight key items needed in the console versions to get the better ending, is not in the MS-DOS version per se, but it is seen before the final stage of the game, where the player receives orders to attack the Kilmaat ship. Likewise, the Team Dolls are not in the MS-DOS version.