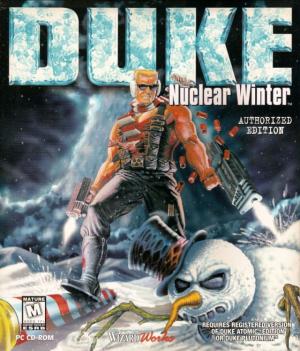 ALIEN SCUM HAVE TAKEN OVER THE NORTH POLE - IT'S UP TO DUKE TO SAVE THE WINTER WONDERLAND There's diabolical danger in the northern Ice-Land, Alien scum have taken over, and the fate of everyone's favorite jolly old man and his village of merry little ones hinges on an icy rescue. There's only one man for the job... one man who can blast the Santa-stealing, elf-torturing, snowman beating mutants... The one and only sub-zero hero, DUKE NUKEM. So, get ready for a frostbitten folly, 'cause Duke Nukem's at the North Pole, The Winter Wonderland wil never be the same once Duke's begun the Arctic meltdown. Features: 7 Icy Levels New Arctic Monsters New Winter Wonderland Art Duke travels to the North Pole, through the streets of the winter wonderland, through the Jolly Red Man's castle and much more!!! Works with Duke Atomic and Duke Plutonium