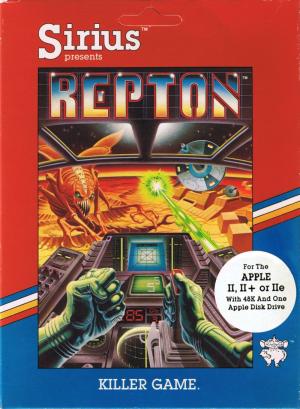 Repton is a Defender-inspired game written by Dan Thompson and Andy Kaluzniacki for the Apple II and published by Sirius Software in 1983. The game was ported to the Atari 8-bit, and Commodore 64. The player controls a fighter ship sent to stop a fleet of invading aliens from building an attack base on the planet Repton. The ship is equipped with lasers and a limited number of nukes that can destroy all enemies on the screen. The player can use an invulnerable shield for defense, but cannot steer or fire while it is up. If the player puts the shield up while moving, the ship will coast to a stop. In addition, a radar screen indicates the location of enemies on the planet surface. Each level of the game is played in two parts. During the surface attack, the player fights enemies in order to delay the construction of the base. "Warning" messages indicate that a fresh wave of enemies is arriving, while an "Alert" tells of an attempt to siphon energy from the planet. If the player can fly through the enemy's energy beam in time, then pass through a charging station, the energy will be returned to the planet; otherwise, it will go into building the base. Once the base is completed, the planet's defenses trigger a bomb that destroys the entire surface and the action shifts to the underground caverns, where the radar does not function. Here, the player must dodge enemy attacks and eventually destroy the base's power core, after which the next level begins with increased difficulty.