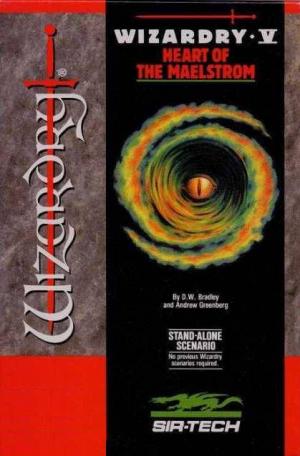 Wizardry V: Heart of the Maelstrom

Following from the events of Wizardry III: Legacy of Llylgamyn, Heart of the Maelstrom begins after a period of peace brought about through the use of L'Kbreth's Orb is shattered when the powers of chaos literally begin to emerge into the world. These unnatural energies are especially focused in a series of tunnels beneath the Temple of Sages in Llylgamyn, fittingly called the Maelstrom. Adventurers, namely the player party, are recruited to journey into these caverns and track down a means of summoning a being known as the Gatekeeper who can seal these chaotic energies once more. Unfortunately, he has been imprisoned by a rogue sorceress known as the Sorn. The party begins by searching for G'bli Gedook, a high priest and guardian of L'Kbreth's Orb. He instructs the party to venture deeper into the caverns. After traversing down to the eighth floor, the party must appease four beings known as the Card Lords by bringing them their respective suit. Once this task is accomplished, the party can venture to the Heart of the Maelstrom and the Gatekeeper may be summoned. As this occurs, the Sorn and her own party of adventurers strike, prompting a final battle. With her defeat, the Gatekeeper awards the party the Heart of Abriel. They return with this to the surface and order is restored to Llylgamyn.