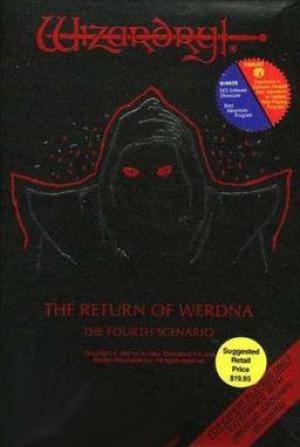 Wizardry IV: The Return of Werdna

The game begins at the bottom of a 10-level dungeon. Most of Werdna's powers are depleted, and must be gradually recovered throughout the game. The initial goal is to climb to the top of the dungeon, reclaiming Werdna's full power along the way. Each level has one or more pentagrams at specific points. The pentagrams have three purposes: The first time a pentagram is discovered in a level, Werdna's strength increases, and a portion of his powers are restored. This only happens once per level; finding multiple pentagrams on a single level will not increase his powers multiple times. The second purpose is that monsters may be summoned from the pentagrams. The higher the level, the stronger the monsters available. There is no cost to summoning monsters, but only three parties of monsters may be summoned at a time, and any existing monsters will be replaced by the summoned ones. The third purpose is that pentagrams refresh Werdna's health and spellcasting capacity. Instead of fighting monsters, the player fights against the heroes from the past three Wizardry games. Players of the first three games who sent their character disks to Sir-Tech might have their characters present in Wizardry IV.