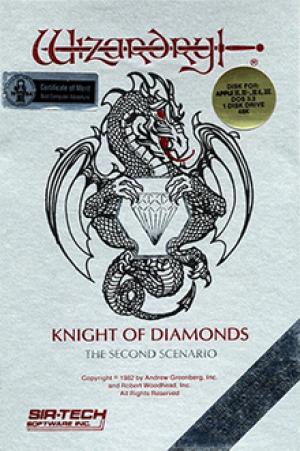 Wizardry II: The Knight of Diamonds

The game begins with the city of Llylgamyn under siege. Llylgamyn's rulers have been killed, and the city's only hope is for the recovery of the staff of Gnilda, only obtainable from trading the mystic "Knight of Diamonds" armor from the legendary Knight of Diamonds to fend off the invaders. Unlike the first scenario, where half of the levels had no purpose plot-wise and could be skipped if the player wished, exploration all of the levels in Knight of Diamonds is necessary to complete the game. Each of the six levels has a piece of the Knight's armor somewhere in the level, and all of the pieces must be collected in order to finish the game. Furthermore, unlike in the first scenario, there are no elevators that can be used to skip levels, and teleportation spells will fail if the party attempts to use them to teleport to a level that has not yet been reached via stairs.