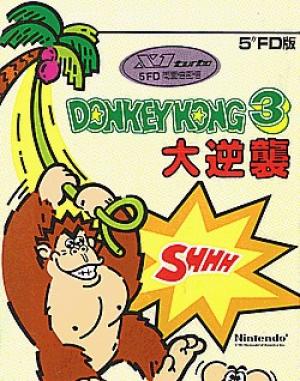 After 30 years on japanese lands, the game was saved from total obscurity thanks to hardcore fans. The game itself is only based loosely on Donkey Kong 3, so it isn’t a direct port. Rather it’s more like a sequel or spin-off. Donkey Kong 3: Dai Gyakushu (The Great Counterattack), still features Stanley and Donkey Kong, but the platforms, gardens, and greenhouses are gone. The goal this time around is to stop a parachuting Donkey Kong from reaching the ground, while killing the same insectoid enemies. Thanks to this change the game has a variety of locales, including a highway, in space, and in front of some aliens, in a total of twenty odd stages.