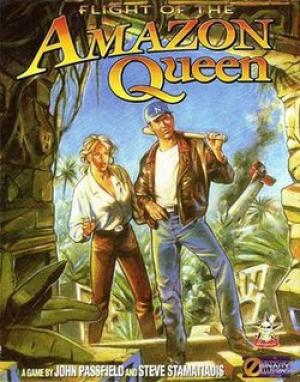 Flight of the Amazon Queen

In 1949, Joe King, pilot for hire and owner of the Amazon Queen airplane which he uses for his work, arrives at a hotel in Rio de Janeiro to transport his next customer, famous film actress Faye Russel, only to be ambushed by his Dutch rival Anderson. Locked in a hotel room and trapped by Anderson's goons, Joe quickly gains assistance from Lola, a showgirl at the hotel and a former love interest, and escapes, making it back to the airport with his mechanic Sparky, just in time to stop his rival taking Faye. Wasting no time, Joe quickly pilots the Amazon Queen towards the location of Faye's shoot, only for a storm to cause him to crash-land in the Amazon jungle. After getting Faye and Sparky to safety, Joe begins searching for help, soon encountering a parrot named Wedgewood with a message for help. Seeking out the person the message was for, Joe meets with Trader Bob, who soon asks for his help in rescuing a princess named Azura from Floda, a lederhosen company that Bob suspects is a cover for something sinister Joe quickly begins searching for the jungle, encountering an entire tribe of Amazon women who capture him and took in Faye when she decided to seek help herself. Released by the tribe, Joe agrees to help them rescue Azura as well. Finding the princess within a hidden base beneath Floda, Joe frees her and returns to her tribe, only to find himself coming face-to-face with Floda's leader - Dr. Frank Ironstein, a mad scientist who seeks to conquer the world by turning Amazon women into dinosaur warriors through the use of his DinoRay invention. Seeing that Joe was smart to get around his security, Ironstein coerces him into helping him find an artifact from a temple that he requires known as the Crystal Skull, threatening to harm Azura if he doesn't. Left with no choice, Joe agrees, and heads for the temple, navigating traps and puzzles and eventually finding what he needs. Returning it to Ironstein, Joe quickly finds himself betrayed and trapped in Floda's base, but soon escapes and goes after Ironstein with the help of Anderson, his rival having originally been hired by the scientist to assist but later deciding to turn against him. Heading into the valley, Joe assists in trying to find Ironstein and manages to stop him, saving the day, before taking the scientist's Zeppelin and flying into the sunset.