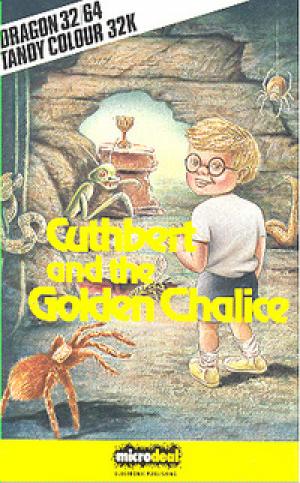 Cuthbert and the Golden Chalace

Legend tells of a fabled Golden Chalice that can bring wealth and long life to whoever it belongs, being placed at the end of a deep cave. Having heard these tales, Cuthbert sets off to try and collect the chalice, but will he succeed where many others have failed? The cave is filled with deep pits that will mean instant death should he fall in. Other hazards include poisonous snakes, swarms of fast moving bees and giant deadly spiders. Will you be able to take on the challenge and guide Cuthbert to the Golden Chalice? Each time Cuthbert makes it to the right hand side of the screen, you will score 100 points for every remaining Cuthbert you have left. If you are skilful enough to reach the last screen, you will find the Golden Chalice. To collect it just make your way across the screen as usual. You will then go back to the first screen and move up a skill level. There are three skill levels in the game, representing Slow, Medium and Fast games. The game is made up of twenty screens. The first few screens only contain a few obstacles and after a little practice should not cause too many problems, but later screens will have up to six spiders, bees, snakes and the ever-present pits. All screens follow set patterns so you can master them and go on to reach the later screens. You will find however that some screens require precise and exact timing in order to complete them. All the screens can be completed but it will ned a lot of practice before you come close to collecting the Golden Chalice. Good luck! Game Controls Right hand port joystick control only. Joystick fire button to jump. ENTER/SPACE - Pause/Resume