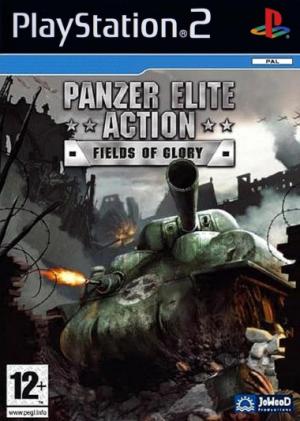 Panzer Elite Action: Fields of Glory is a World War II tank action game, in which the player can command a platoon of either German (4 tanks) or American (5 tanks) forces in three scenarios: the Tunisian campaign (1943), the Italian campaign (1943–44) and the Battle of Normandy (1944), each one featuring a series of battles. Later on, fans developed new scenarios in North Africa (1940–41) and the Soviet Union (1941). The player can roster the crew for each tank in his platoon, based on their skills, which increase over time. New members become available over time, for replacement of dead and wounded. They may also be awarded historical medals. Each battle station on the player's tank may be occupied, and the gun sighting may be set to be very realistic. Better tanks become available during the course of time (Tiger I for Germans, later models of Sherman for Americans), close to the real availability of these models during WWII. Every few kilometers there are repair and ammo stations for when the tank is damaged by enemy fire. There is also a multiplayer mode for up to 32 players in each server, and the player gets to choose which tank they may use. There are 18 missions, for German, Russian and allied campaigns. The first few missions are fairly beginner-friendly and easy, and they gradually get tougher and tougher as the player progresses. The game is very detailed and quite realistic, with most of the major tanks of World War II included in the various missions. There are night missions, where the player goes under cover in a captured enemy tank. There is also an American version of the game, First Battalion.