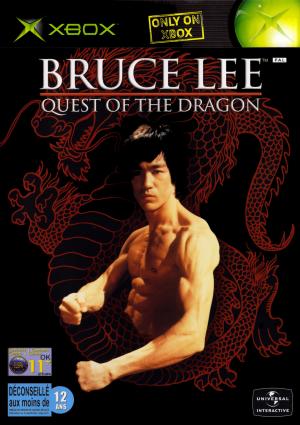 Bruce Lee: Quest of the Dragon

Bruce Lee: Quest of the Dragon is a beat 'em up video game featuring martial artist Bruce Lee. It was developed by Ronin Entertainment and published by Universal Interactive, and was released in Europe and the United States for the Xbox in 2002 to a negative critical reception. You are Bruce Lee, legendary martial arts master. Your father has been kidnapped, your monastery desecrated, and the mystical Golden Relic - keeper of the ancient martial arts secrets - has been stolen. Investigate the mysterious Black Lotus crime organization and the beautiful and deadly Dragon Lady. Use your mastery of Jeet Kune Do to punch, kick, block and combo as you fight hordes of thugs and crime bosses. In this compelling blend of epic adventure and intense fighting action you finally get the chance to be Bruce Lee.