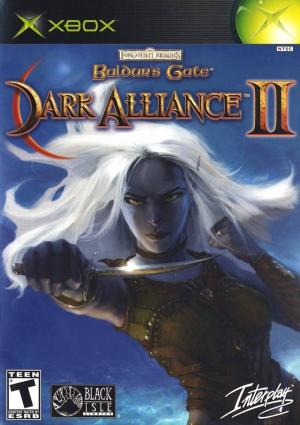 This sequel to the hit 2002 action role-playing game set in the Dungeons & Dragons universe picks up right where the original left off. The mysterious disappearance of the Onyx Tower and death of Eldrith the Betrayer had left the noble heroes trapped in an unknown setting. Yet the harbor town of Baldur's Gate is still very much part of a heinous plot to control the Forgotten Realms. Five new character types vow to stop whoever or whatever is behind this new alliance, no matter what the cost. Using the 3rd Edition Dungeons & Dragons rules set, Baldur's Gate: Dark Alliance II features four new acts of hack-and-slash combat and powerful spell casting. Even more monster types will engage in real-time battles using the same overhead perspective as witnessed in the original game. Each selected character can parlay the experience gained from combat into acquiring new feats and enhanced abilities over time. To help in battle, a new item creation system lets players craft magical weapons and armor using raw materials found during their travels. As before, two heroes can join the adventure in cooperative play on the same screen, with each character differing in the types of feats and powers under his or her command. Equipment can be found or purchased from local merchants using the gold looted from felled creatures or received as payment for quests. Baldur's Gate: Dark Alliance II also features a number of hidden areas, secret characters, and literally hundreds of items to find and use, including potions, scrolls, and wands. In addition, the game features a new branching storyline that offers players a choice where to go next for fortune and honor.