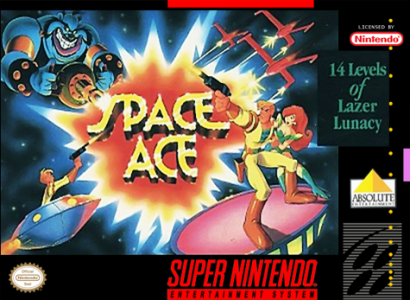 Borf has kidnapped Dexter's girlfriend Kimberly and is threatening to turn earth's population into babies using his "Infanto Ray". Naturally, Dexter cannot let this happen and sets out to stop Borf and rescue Kimberly. While following the same story as the Laserdisc conversions, the SNES version of Space Ace obviously lacks the long video sequences of the original, and also features different gameplay. Instead of only pushing the right button at the right moment, the player has complete control over Dexter. Most of the time, he will be busy jumping over chasms and dodging alien attacks, but occasionally, an 'energize'-symbol will appear which, by pressing the correct button in time, will temporarily transform Dexter into his stronger alter ego and enable him to shoot at his enemies. Once he boards his space ship, Dexter has to find his way out of a labyrinthine seen from a top-down perspective, destroying obstacles with the ship's laser and avoiding collisions. In order to retain the atmosphere of the original, the SNES version features a large number of (short) death animations and the platformer levels always follow the exact same sequence, which results in a trial&error-style gameplay somewhat similar to the original.