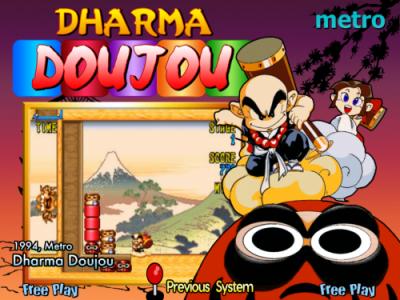 Dharma Doujou, or Daruma Dojo, is a puzzle game with stacks of blocks that the player bashes through to a gutter that collects the blocks at the bottom of the screen. By removing blocks of the same type, the player eliminates them. In the game's story, the daruma/dharma dolls and colored blocks are summoned by oni to terrorize the populace, and it's down to the player character (the player can choose from a male and a female character) to remove them. Dharma Doujou was released to the Arcade in 1994 and ported to the Super Famicom the following year. The game board is comprised of various stacks of circular colored blocks, like the ones commonly seen underneath daruma/dharma dolls. The player character can rise and drop via a magic cloud, allowing them to sit parallel with any stack. By hitting a block stack, the one furthest from the player - to the far left - falls through a gutter that runs down the left side. The other blocks fill the gaps left behind, each moving one space to the left. If the player knocks five blocks of the same type through, they vanish off the grid and allows the player to survive a little longer. Five mismatched blocks will appear as the new bottom row, pushing everything above it up one block, though this is sometimes necessary to line up the next five matching blocks. The goal of the game is to survive as long as possible, indicated by a timer on the side of the screen which the player can temporarily halt by eliminating lines of blocks.