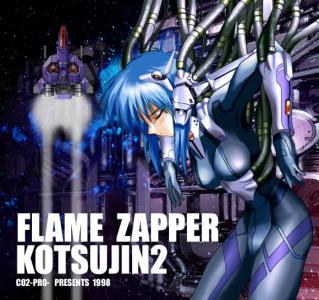 Flame Zapper Kotsujin is a vertically-scrolling sci-fi-themed shoot-em-up. The player controls a fighter spacecraft, advancing through five large levels swarming with enemies (space ships, turrets, tanks, etc.), each culminating with a boss battle. The spacecraft is armed with primary and secondary weapons (fired simultaneously), as well as powerful bomb attacks. Each of these comes in three varieties distinguished by color: red, yellow, and purple. The red group of weapons focuses on spraying fire in different directions; the yellow group contains powerful weapons without covering much of the screen; the purple group is composed of homing lasers and missiles. Power-ups usually stay on screen for a while, changing their color properties.