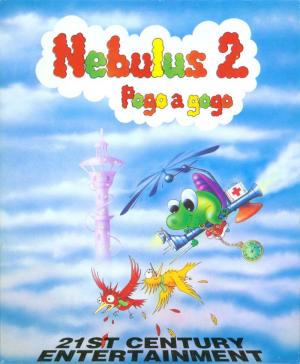 This is a sequel to highly rated Nebulus (known as "Tower Toppler" in the US). The gameplay is much the same except this time Pogo must topple the towers and then repair them aswell! Why? Well the storyline this time around is that the evil crime boss known as "The Uncle" has taken the seven Towers of Life (which produce oxygen for their respective planets) ransom! Because the Galactic Government does not deal with terrorists, they've sent construction worker, Pogo, to deal with the problem. This is where you come in. Pogo must (as before) make it to the top of the seven towers whilst avoiding all the baddies and traps that have been laid there for him. Once he gets to the top, the tower is toppled. Now he must would over 80% of the crumbling platforms to return power back to the tower before he can move on. There are three new subgames and several new features in Nebulus 2, such as Jumping Boots, Rockets and Magnets (for pulling Pogo up to higher platforms).