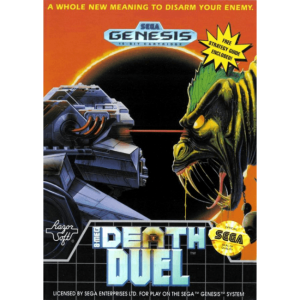 Taking place in the future year 2140, the nine of the ten Galactic Federations had gained unwarranted control over galaxy flight traffic and territory. This has caused the one remaining Federation to suffer a loss of supplies and space pirate attacks. The dispute can only be settled through a warranted duel with the Federation’s one duelist to fight against the collective nine alien duelists representing the nine Galactic Federations in control of the space traffic ways, otherwise known as The Super 9’s. The player assumes the role of Barrett Jade, a mecha pilot to win back the space ways and duel against the nine other duelists. Players started the game off with their first duel with a set number of ammunition for their weapons; the player’s robot had a total of three weapons indicated by all three buttons on the controller. Once the player completed the duel, they would go through a type of Bonus Stage that would qualify them for the next duel as well as increase their score and money. Players could then purchase more ammunition or even new weapons for their robot at a local shop. Players had to time their attacks and aim precisely for key locations of their opponents body. Some enemies could regenerate missing parts of their body (including their head) while some enemies depended on particular mechanical parts to evade fire. If the player ran out of ammunition for all their weapons before the duel was over, they would lose a life and restart the duel over (with the same amount of ammunition they started the duel with). If the duel timer ran out before the duel was over, the player would also lose a life and restart the duel.