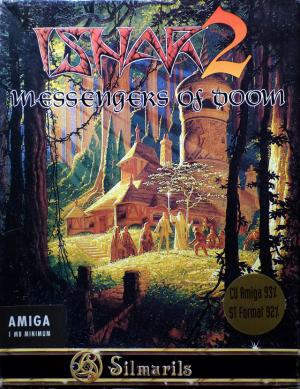 Ishar 2 was published in 1993 on Amiga, Atari ST and DOS. In Ishar 2, the player starts with the character of Zubaran, who is the new lord of Ishar. He receives a vision that tells him to defeat the sorcerer Shandar. It is also possible to import a party of characters from the first Ishar. The game now takes place on an archipelago, each island bearing the name of one of Jarel's companions. Each island also features a different type of landscape: Irvan's island is covered with swamps, Akeer's and Otbar's are underground complexes, Zach's island is covered by a city, Jon's is mountainous, and Thorm's has treetop gangways in a forest. This game has a combat system that's more ergonomic than in the first Ishar, and a day-night cycle in which shops are closed at night and the nightclub is closed by day. It also adds a bank. Saving the game does not remove gold from the player any more.