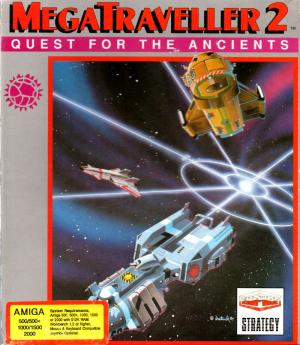 MegaTraveller 2: Quest for the Ancients

Before starting a new game, the player must assemble a party consisting of up to five characters. A pre-generated team is available for quick access to the game, but it is also possible to use MegaTraveller's detailed character creation system to control the attributes, skills and inventory items with which the party members begin the game. Character creation involves generating a character with randomly assigned attributes and subsequently guiding that individual through one of over two dozen available careers to build up his or her skills and possessions. When characters retire or "muster out" from their career, they are added to the pool of available members from which the party of adventurers is selected by the player. The skills they possess at the start of the game may be enhanced later on through repeated use or by paying for training. Once a party has been outfitted, it begins the game in a city on the planet Rhylanor. The player sees the city from an overhead perspective with various symbols denoting the buildings the party may visit. The party may also travel to other cities or even traverse the planet's surface outside of the cities. Players issue commands via hotkeys or clickable icons to direct party members to move around the planet's surface, interact with non-player characters, engage in combat, use items and enter buildings. When the party is issued certain commands, the member whose attributes and skills best qualify him or her to perform it automatically volunteers. The player may override the automated selections made by this "PAL system" and choose another member instead to perform the assigned task. Travel to other planets is accomplished by either purchasing a ticket aboard an interstellar passenger liner or by boarding a private spaceship (if a member of the party happens to own one). Ownership of a spaceship also provides the party an opportunity to earn money by trading various commodities between planets or by attacking other spaceships for the purpose of stealing their cargo. Three classes of spaceship are available for the party to use in the game, including a derelict, but repairable, vessel constructed by the Ancients. Once the party has arrived on another planet, it may disembark and explore that world's cities and terrain. Although all cities feature the same basic layout, the number of accessible buildings varies from one city to another. On some planets, the party has the opportunity to explore a ruin built by the Ancients for items that may mitigate the crisis on Rhylanor. Gameplay is nonlinear; the player has the freedom to pursue various paths to gather clues and obtain the means necessary to resolve the crisis on Rhylanor. Woven into this overarching theme, the game also includes numerous subplots which afford the player opportunities for earning money, obtaining items, and locating Ancient ruins and artifacts. However, the player is constrained by a strict time limit of seven years in which to complete the main plot and thereby thwart the crisis on Rhylanor before the planet is completely inundated.