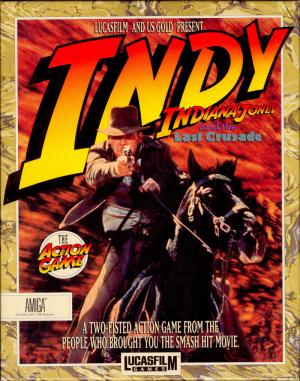 Indiana Jones and the Last Crusade: The Action Game

Indiana Jones and the Last Crusade: The Action Game was published in 1989 by Lucasfilm Games, based on the film of the same name. The game was released for the ZX Spectrum, Amstrad CPC, Commodore 64, Atari ST, Amiga, IBM PC, MSX, Genesis, Master System, Sega Genesis, and Game Gear. There are also two completely different games for the Nintendo Entertainment System and Game Boy, both titled Indiana Jones and the Last Crusade, one released by Taito and the other by Ubisoft, with no subtitle to differentiate the two versions. As in the movie, the player's quest is to find the Holy Grail. En route, the player must find the Cross of Coronado, the Knight of the First Crusade's Shield and your fathers Grail Diary.